One of my favorite data sources is the NYC OpenData site. A while back I noticed a really interesting data set on that site, and I’ve been mulling over what exactly to do with it for a while. The data set in question is the 2015 Street Tree Census. I knew there was some interesting question that this data could answer, I just had to think of it (or ask my girlfriend to think of it for me.) She wanted to know if poorer areas had fewer street trees. While this isn’t a question that the street tree census can answer alone, data about location and income shouldn’t be too hard to come by. I decided to use the tidycensus package to grab information about median income levels in New York.

First things first, I downloaded the data. Then I subsampled it just to play around a bit. I wanted to make sure I had a handle on the structure, so I decided to whip up a quick map of tree locations in the subsampled data.

That done, I decided it was time to get my hands dirty with tidycensus. I got up and running using Julia Silge’s fantastic blog post. This gave me everything I needed to dig into some census data.

First, I downloaded median income at the tract level, along with tract geometry, for each of the five counties that make up New York City. This data took a bit of cleaning until I was happy with it, but overall not so bad. tidycensus really lives up to the “tidy” in its name. All I had to do was a little string manipulation. I did this to make the way the tracts were described match up with the format used in the trees data set. In a little bit, I’ll join these two data.frames together by tract, so I wanted them to match.

Let’s take a look at what the median income looks like across the city!

First, I’m going to add a new column called to the new_york dataframe called area that’s just the area of each census tract. I’ll use this later to calculate the number of trees per unit area.

Then I added a county column so that I can use it in the next step to join the trees data set with the census ACS data.

This is the final join that combines these two data sets. I chose a right join because I want one row for every tract that includes the number of trees in that tract as a variable.

Now I’ll do some sanity checking on my data to make sure everything looks good. It turns out that I have some NAs. My best guess is that these represent tracts with no trees. This is backed up by the fact that there’s at least one tract with only a single tree. If it’s possible to have one tree, it’s probably possible to have no trees in a tract.

In this next chunk, I do a bit of data manipulation. I replaced the NAs in the number of trees column with zeroes. I also calculated the quantity trees_per_km2 using the area column. This is a better measure of the number of trees in a tract as it controls for the physical size of the tract. Finally I put median income on a scale of tens of thousands of dollars. This makes the numbers easier to wrap your head around and interpret later on.

Now let’s take a look at a plot of our data! 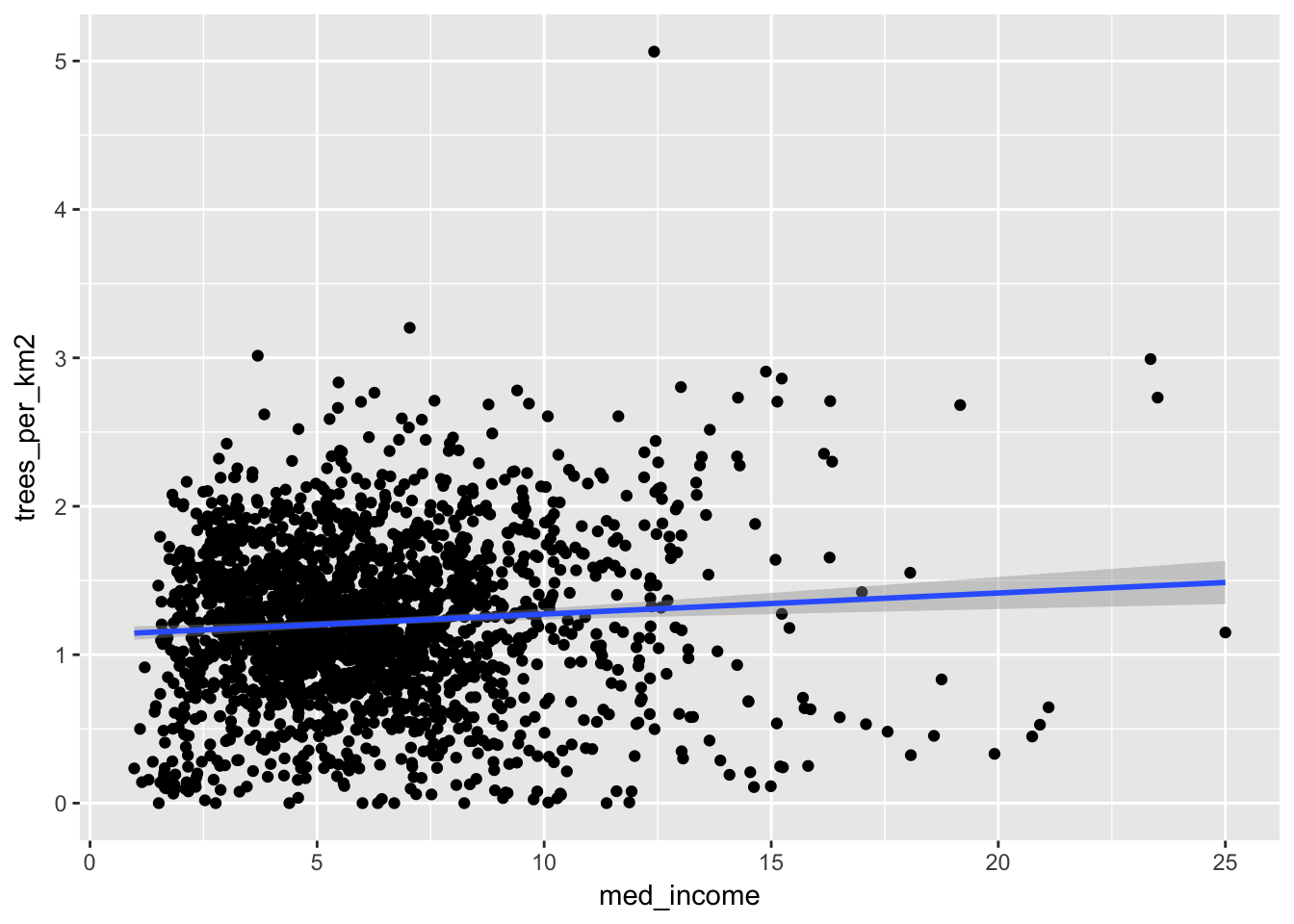 Here it looks like there’s a very slight positive trend, indicating that higher income areas do have more street trees. But is this significant? We can fit a linear model to find out.

According to this model, the effect is significant, even if it is small. We’ll talk about interpretation and if this is practically significant a bit later. For now, let’s take a closer look at this model. It’s very possible that one of the central tenets of OLS has been violated. I would hazard a guess that the errors between tracts are highly correlated. High income tracts are probably close to higher income tracts and tracts with more trees and probably next to more heavily treed tracts.

To take a look at this, we’ll add the residuals to the data set so that we can plot them. Then we’ll make a leaflet plot and visually examine the residuals for spatial autocorrelation.